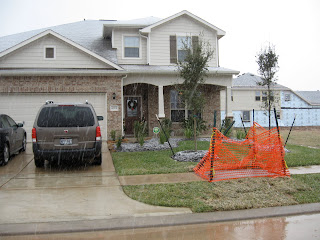 So, I thought I'd jump on here to say that I had a bit of good news today :) I called our mortgage company to inquire about whether they needed me to send them a tax bill that I'd received last week, since we pay an escrow and that is supposed to cover our taxes. Anyway, I had several questions that I asked (since this is our first go-around with owning a house/taxes/etc.) and I wanted to be sure that I have all of our bases covered. One of the things I asked was when we would know what our "new" house payment was going to be, since I was assuming that it would increase at least somewhat for a new escrow amount - higher taxes is what I was getting at. I really don't want to get hit with a huge tax bill because we haven't been paying enough all year! So, she said that our account wouldn't be reviewed until September, at which time they would adjust our payments accordingly. UNLESS we wanted to have a review done now? So, of course I said yes - I'd much rather have the increase now and know that we're paying enough versus waiting until almost the end of the year! Well, she quickly ran through a few things then informed me that our payment would indeed be changing. Our property taxes had actually DECREASED and we had overpaid according to their records, so not only is our house payment going down, but we're getting a $450 refund :) I was shocked - since when do taxes go down?!?

Anyway, for now, we are very excited about saving about $40 a month, and the refund will be a nice addition to our savings account :) That said, I'm not going to just assume all is well - I plan to call them again over the summer to have them re-asses things to be sure we're still paying enough!

So, thought I would share and say PTL for God's grace :) Our being in this beautiful house was nothing short of a miracle from start to finish, and He is continuing to bless us and remind us that He is in control!

*P.S. This photo was taken during the snow we got on December 4th - Alex's birthday :) The orange blockade was put there by the water district when they ripped out our sidewalk and part of the yard to fix a pipe! Its the most recent pic I have right now.
Posted by Jennifer at 11:30 PM

Yay, what a nice surprise. It sounds like your taxes were maybe overestimated in the very beginning. Good news is always nice!

A couple of things - you should be paying taxes for 2009 on a vacant lot if the lot was indeed vacant as of January 1, 2009. If this is the case, then expect your taxes to possibly go UP as you will need to pay taxes on a 100% improved lot (my husband works for an appraisal district). Call the mortgage co and make sure they are calculating your escrow based on an improved property...just something to watch for so you aren't surprised at this time next year...make sure they are calculating the right thing! You can email me privately if you have any appraisal district questions and I'll answer what I can.

Also, your records are public - go to the Harris County Appraisal District to look them up and make sure they have your improvements on there. If they don't they can roll back the taxes and collect them another year, which really bites. If you have ANY questions - just email.