I'm stealing this from my friend Missy @ It's Almost Naptime! 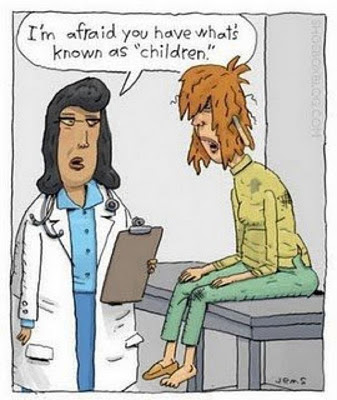 Posted by Jennifer at 4:48 PM 1 comments 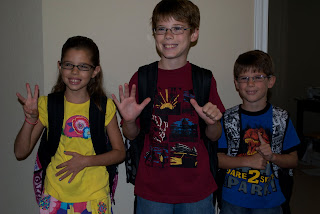 Alex is in the 6th grade, Morgann is a 3rd grader, and Ian is a 1st grader this year! 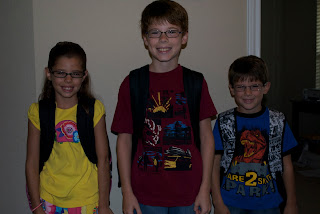 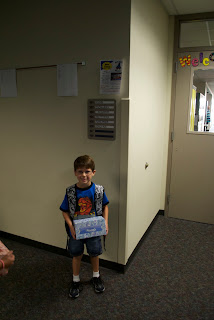 Ian standing in front of the 1st grade hallway 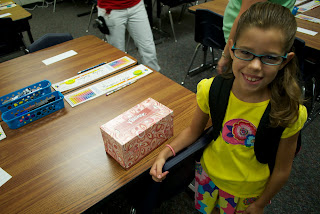 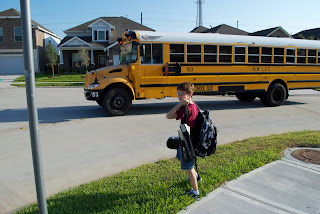 Alex leaving on the bus for his 1st day of middle school!

Well, we've reached day 5, and I have to say, I've never had such a quiet house! Well, I mean, not this quiet with the kids home :) Everything is so PEACEFUL. There has been almost no fighting - and with 3 kids, that's a true miracle - and they are playing together willingly! The boys have discovered their long-lost remote controlled helicopters and have been playing with them daily. Morgann has rediscovered playing dress up and is constantly showing up in a new outfit. And they've even made time for playing with friends, being sure to notify them up-front that they cannot turn on any games or TV.

They haven't whined at me about not being able to watch TV or movies, and they haven't begged me to return their electronic devices. Honestly, I'm in shock over it all. I assumed this week would be no less than a battle of the wills, with a constant barrage of begging & deal making. But its actually been the exact opposite.
In a nut-shell, its been a wonderful, learning experience!! And I can see that moving forward, we will be making some changes to our "regular" lives.
P.S. And can I just say that while I've found not logging into FB a bit of a pain when I'm bored or waiting around on someone or something, I've survived just as well as the kids have. And I'm giving serious props to Michael who was the least in-favor of this change - I haven't seen him flip on his gaming computer once since Saturday! Honey, I'm proud of you and appreciate your "taking one for the team" for this week.
Posted by Jennifer at 10:17 AM 1 comments

This is our week to "unplug" from the world of electronics - games, computers (unless work-related), TV's, movies, etc., etc., etc. Its something that I've been tossing around trying for a while, but just haven't had the guts to do it. But the constant bickering, whining, complaining, etc., had taken its toll on me as of last Friday, and by Friday night, the decision had been made. And while Michael wasn't too keen on the idea because I was asking him to unplug from his games too, he relented and agreed to try it out - at least while the kiddos are awake.

So, while I sit & type on my blog, we are officially unplugged - do you see the irony in this? Yes, we turned off the kid's access to the internet, took away all electronic devices, including phones, camera and iPods, and have disconnected from technology for the week. Welcome to the 1980's!!! Michael & I are only using our computers for work-related items, and email - since this is the way so many any of us communicate now. But I have logged off of Facebook which, I am sad to say, is my vice. I've already had several things that I've wanted to post as a status update, but I've resisted, and am instead making a mental list of things that I will need to update later ;) You know, because everyone is waiting to hear from me!!!
But I am amazed at the peace that has hit our home! REAL peace!!! There has been almost no fighting or arguing between the kids, and the lack of "I'm boreds" has decreased dramatically. They already know that they can't watch a movie, watch TV or play a video game, so they've just made due with good old-fashioned board games, old-timey books not on an electronic device, and toys they haven't played with in quite a while. They have all been reading more, and Alex has almost finished the 1st of the Harry Potter books in no less than 2 days!!!
We may unplug more often :)
Posted by Jennifer at 1:53 PM 1 comments 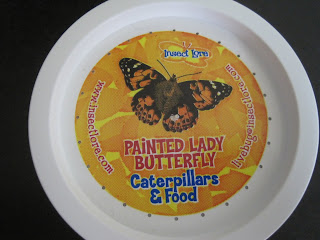 Our caterpillars arrived on 4/19! 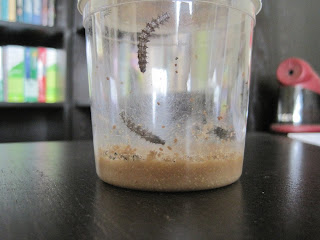 They were small and not too gross. And here they are on 4/21 - much bigger! Maybe double their original size already! 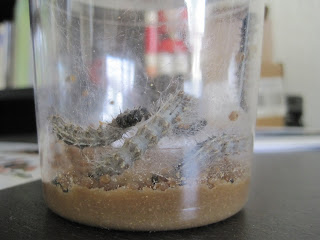 And their little container is full of gross-ness :(
But its a learning process for the kids - they check on them every day and are learning little tidbits about how caterpillars live. The brown in the bottom of the container is their food. They spin silk to help them get around, so that's what the "white" substance is you can see in the last picture. We aren't allowed to open the lid so that everything stays un-contaminated. They should eventually crawl to the top and form their chrysallis' and then we will be able to move them to their new home :) Once they emerge, we'll watch them for a day or so, then release them into the garden and hope they stick around and like our butterfly plants!
I'll post more pics in a day or 2!
Posted by Jennifer at 2:01 PM 1 comments
Older Posts Home
Subscribe to: Posts (Atom)